Peter Schroeder and Risa Wyatt welcomed the new year in style with a “podium finish” at Whistler Ski Resort.

From Michelle Peters: Idaho Fish and Game Commission reopened steelhead fishing in the Clearwater River and lower Snake River downstream of Couse Creek Boat Ramp, beginning on Jan. 1. Daily bag limit in those sections is limited to one adipose-clipped steelhead per day, none over 28 inches in length.

Gary Lewis took advantage of the Clearwater opener with guide Toby Wyatt and they caught 12 steelhead!

From Arnold J. Theisen: I have been retired for many years now and I don’t get out much with my camera anymore, but I was recently reminded of a lesson that many new members may not yet fully appreciate: Try to assemble as many “evergreen” articles and photos as possible in your library of work. That is to say photos of scenes that will not be altered significantly by passage of time. Likewise, articles that will be timely whether they are read today or years from now. I offer this tip because I recently sold two 20+ year old photos from my old 35mm library to one of our members who needed them for her new book.

From GI Wilson: My plunking buddy Doug, a young guy, (only 50) also a logger, talked me into buying a second season spike bull elk tag. “You have a handicapped license; I have a key to where we have logged 10 years. You get a bull down, I’ll go get him. We will get you a bull.”

Opening morning we sit in heavy fog five hours drinking tea. Decide to give it up, come back tomorrow. He gets out of the truck to move a log, fog lifts and a herd has fed out of the timber at 225 yards across a canyon.

Two shots and I have a big spike. He bails off into the canyon, does all the work. We come back the next morning with another fishing buddy, trailer and ATV. They drive right to the bull, load it up–two trips–head home for a cold one. My toughest task was to very carefully use my walking cane to get 20 yards for a shooting rest.

Doug even took it to his cousins walk-in cooler for a few days.; can’t find friends any better than that!

I’m probably going to do an article for Oregon Hunter about the hunt.

From Dave Kilhefner: The latest edition of Fishing in Oregon just came out. Many of the photographs in this book were contributed by NOWA members.

There is a need for individuals who live within driving distance to help staff the booth. Times are available from 1-7 pm on Friday, 10-6 Saturday, 10-5 on Sunday. You do not need to be present for the entire shift.

Please contact Dennis Dauble (DennisDauble@icloud.com or text 509-392-3229) if you can help out. This event provides opportunity to interact with hundreds of sportsman over the weekend. Wayne Heinz and Dennis Dauble hope to sell a few books, you could do the same. 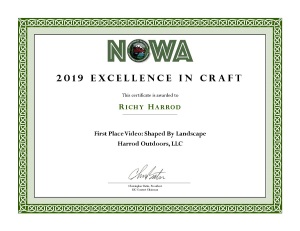 It’s time to submit your entries for the 2019 NOWA Excellence in Craft Contest!

Here is the contest entry form and rules:  2019 NOWA EIC Contest. The deadline for submissions is January 15, 2020.

It’s understood the contest submission guidelines can be a little confusing; this is for the blind judging process. New this year, NOWA will offer to prepare your contest entry for a fee of $3 for members and $5 for non-members. This preparation service is for categories 1-6 only & all proceeds will go to NOWA. If you’re interested in this service please mail your entry to NOWA, PO Box 888, Tualatin, OR 97062 or email to Dave@kbi-ins.com

In addition to Bert Gildart’s great cycling adventure story, NOWA members got out last month and enjoyed the great outdoors. Here’s their stories:

From Joe Warren:  November is one of my favorite months of the year.  Though I would prefer to mostly fly fish, big game hunting is also on the menu.  This year’s November was epic starting off with some fabulous lake trout fishing in central OR where I caught the largest trout ever on a fly, a 37 inch lake trout using a fast sink line from a boat.  My deer hunt soon followed with a special draw on Washington’s quality buck in Eastern WA near Omak where I bag a nice 3×4.  With plans to possibly hunt two weeks, it was too soon to go home after only four days of hunting, so with fly rod in hand I wandered over to the Columbia River on Rufus Woods Reservoir and caught a handful of nice rainbows but one particularly nice 28 incher!  Needless to say, my Lunar S-Glass 5 wt. fly rod was bent to the handle for quite some time!  All in all it was truly a blessing and this fall is definitely one for the memory book. 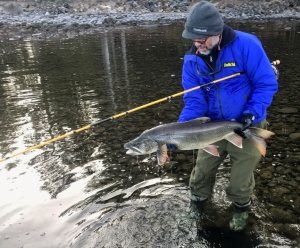 From Dave Kilhefner: Fished the Deschutes on the Warm Springs Reservation side with guide Elke Littleleaf. While heavy rains pelted Portland this day, it was dry in eastern Oregon; a bonus for sure! Fishing partner was NOWA member Robert Campbell who caught 2 steelhead on spinners and I caught a couple nice redsides on beads. 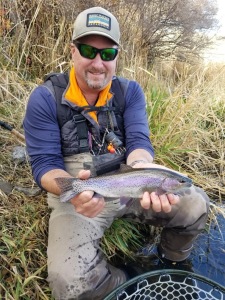 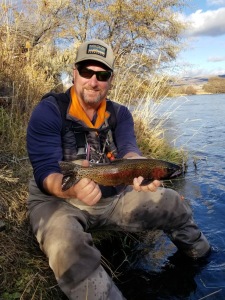 From Tom Knight: I keep plugging away on my book. Right now I’m into two chapters on wild turkey hunting in “ancient times,” like 50 years ago, when the turkey population mushroomed in Klickitat/Skamania counties after their introduction. The first chapter got kind of long (10 pages), so I am working on a second. I am having fun reliving old times!

If anyone would like to a copy, email me at headfish98005@yahoo.com. I’m still laid up awaiting hip transplant, so I am glued to my tablet all waking hours with tons of time to write + answer emails.

For any who believe that NOWA membership consists only of those who hunt and fish in the Northwest, please put that thought aside.  Many of us engage in other outdoor activities such as the biking excursion described here.  It is a trip National Geographic calls “one of America’s greatest adventures.”

I concluded that adventure late this September and, in brief, the ride links together two trails: the Allegheny Gap and the Chesapeake and Ohio Canal.  The trails are joined back-to-back and span almost 400 miles, beginning – or ending – in either Pittsburg, Pennsylvania, or in Washington, D.C.

If the ride is made in a relaxed manner you’ll need about 10 days.  Campgrounds are available along the way but so are B&Bs, and that’s where we camped, roughing it (sometimes!) with cocktail napkins and Meissen China.

Three friends joined me and we all agreed that the trip was a tour through American history and also through some of America’s most pristine woodlands, often graced by sycamore trees arching overhead.  Shortly out of Pittsburg we climbed to the Eastern Continental Divide and then traveled across the Mason Dixon Line.  In West Virginia the trail took us into Harpers Ferry, and some may recall that it was here, in 1859, that a Lieutenant Colonel Robert E Lee put down the John Brown rebellion.  Riding on we crossed into Maryland and passed the shanties of several lock master’s old homes.  Today, if you have advanced reservations you can move in and stay overnight.

Essentially the Canal was initiated by George Washington, hoping to increase trade with Washington D.C. and newly created states such as Pennsylvania, but the Potomac River was laced with many rapids and treacherous falls, and barges could not negotiate them.  Consequently, traders needed a canal.  Today, those falls are an attraction for bikers and so we also stopped to view that river’s many examples.

While riding I believe that I rebounded from some lingering health issues, but equally as significant, became more of the individual we all wish to be. Here, I felt important and not diminished by the burgeoning U.S. population that is now saturating our personal living space and clogging so many national attractions. During our many stops I’d been able to lose myself by soaking up American history and the wildness the two trails preserved. And, then, when I thought myself saturated, I had been able to ride on – stopping at will to soak it all up again, and again and again.

A much expanded and varied version of this story is intended for a travel magazine and I hope, too, in a magazine intended for seniors… not, of course, that I can relate, but I do feel many older folks might be inspired.  In the meantime, if anyone wants details on logistics, please drop a note. Thanks! Bert 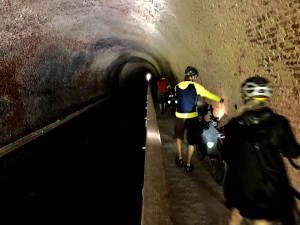 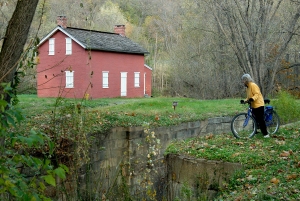 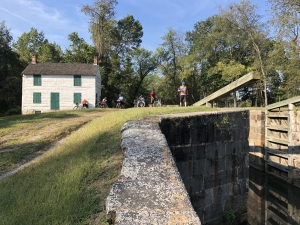 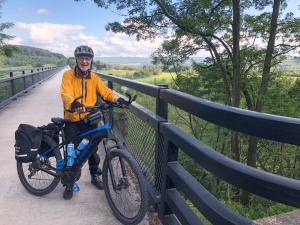 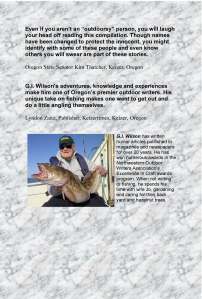 Hi Everyone, GI Wilson compiled a collection of his humor stories and self published a fun-to-read book BEAR CRUSHES DAD.

The book including shipping is $12 – order your copy directly from GI & Jo Wilson or they will be available at the conference next spring.

After posting the link to Artifishal, a film that’s generating some controversy, several NOWA members asked to balance the discussion by provide some countering information on NOWA’s website.

This is a hot topic and both sides of this issue offer ample writing opportunities!

Patagonia’s new film Artifishal can now be viewed for free on YouTube. 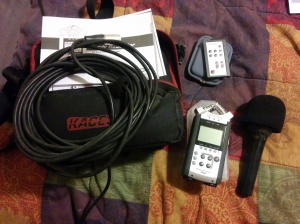 Hi Everyone, Greg Gulbrandsen has a very lightly used Zoom Audio 4Hn  recorder and EV microphone, cables, carry bag and adapters for sale. Only $200 plus shipping.

October is a great month to be outdoors. Here’s some news from NOWA’s members:

From Paul Vang: Spent several days in and around Choteau MT, where we had our conference last year. My 80th birthday was on Thursday, the 17th, and my goal was to celebrate with a limit of pheasants. Alas I got skunked! I had to adjust my level of satisfaction to reality. I might not have gotten any pheasants, but I was out there with my dog and shotgun on my 80th!

For those who came to the Choteau conference, they likely missed one of the best shows around: the Big Sky of Montana, especially the October skies. Appropriately, that catch phrase, Big Sky, was coined by the novelist, A. B. Guthrie, who lived much of the time in Choteau.

From Dave Kilhefner: After 21 years Scott Richmond’s excellent fly fishing website Westfly went off the air on Oct 29th. This event was commemorated by a “Rondi” at at Beavertail Campground on the Deschutes River for a weekend of good food, fellowship and fishing. Scott rented the group campsite and posted the event on Westfly. Good times were had by all and it was a fitting end for the last chapter of Westfly.

Also, scored 2 article assignments from the call for queries posted on this website!

From Tom Knight: Here’s a chapter from my new book: 61 A TALE OF TWO MONSTER STEELHEAD^^.and OTHERS

Be my guest and please edit. Appreciate any comments! headfish4@gmail.com