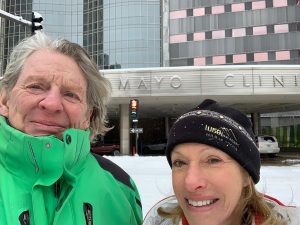 For those who have missed my background, in 1980 I was diagnosed with multiple myeloma, a cancer of the bone marrow, which can be treated but not cured. It was then and is still considered today one of four terminal cancers. I contracted MM as a young engineering/physicist working amid ambient nuclear radiation in the Western Pacific Nuclear Atmospheric Test areas and underground nuclear-testing facilities at the Nevada Test Site. (For reference, all the nearby survivors of Hiroshima and Nagasaki contracted MM and related cancers, and most died within a year or two.) Forty years I have been in remission, one of the longest-known MM survivors, until I cracked my sternum last fall in a freak accident. This led to exams by my Seattle doctors as well as the Myeloma Center at UCSF and a month ago at Mayo. Now we’re back at Mayo for the recommended radiation treatment.

After completing the first of three scheduled weeks at Mayo Clinic in Rochester, Minnesota, receiving five daily dosages of 3.5 Grays (350 Rads) each, I’m surprised (and delighted) I feel as healthy and fit as ever with no signs of fatigue, skin ablation, or other side effects. At each treatment. I’m bombarded by protons traveling 2/3rds the speed of light that are programmed to screech to a halt at the recently discovered tumor hiding behind my sternum where they dump their full energy (Bragg Peak). Unlike X-Rays, Cobalt rays, or other forms of radiation that continue through the body and wreak havoc on the heart or other organs, protons can be programmed to engage once they hit the cancerous mass.

Risa and I are settled in a nice Airbnb near downtown Rochester and make daily visits throughout the clinic not only for daily radiation sessions but for appointments with doctors and specialists as well as lab work and other tests on my heart, kidneys, liver, lungs, and more. This is typical Mayo in not missing anything. Mayo lives up to its reputation as the premier medical center in the country with dozens of high-rise medical buildings and a handful of hospitals connected with each other and the entire downtown with a network of underground walking tunnels and skyways, all well illuminated and decorated with art, fabrics, and colorful painted walls. In addition to the medical facilities, the underground network holds restaurants, retail shops, hotels, and commercial facilities. Blizzards above, California weather below.

The patients are equally intriguing. Heads of state often come, and I’ve seen people from the Middle East and Africa in their flowing robes and national dress. In the past week I have spoken with visitors from Kenya, Somalia, Qatar, and elsewhere who seek specialized medical attention. Often these national leaders are accompanied by heads of their government departments (possibly to assure there will be no coup in their absence) as well as numerous bodyguards. Many receive protection from the U.S. Secret Service including the Dalai Lama who checks in every two years for his physical. The Saudis in particular have embraced Mayo. The royal family flies directly to Rochester each fall in two 747s (they paid to have the runway extended) and  fill up several hotels they own. One plane is for the family and the other transports everything they buy on shopping excursions to the Mall of America in Minneapolis.

Celebrities come here although they are often registered under false names and given private access to protect them from well-meaning crowds. Buildings are adorned with the names of the rich and famous with testaments how they or their loved ones have been treated. For example, the president of the U.A.E., Sheik Zayed bin Sultan donated $25 million to create a new cardiovascular center. The proton-beam radiation-therapy machine that treats me cost $220 million and was a gift from an Iowa businessman. U.S. News & World Report ranks Mayo Clinic as the #1 hospital overall and #1 in more specialties than any other hospital in the nation.

Must say, I’m glad to be here.